4:30 in the morning is a peculiar time to be writing about sharpness.

I am anything but sharp before coffee, before daylight, before noon.

But sharpness has been on my mind lately, because I’ve recently switched to Leica equipment, and joined a community of Leica users so that I could learn more about the methods of using a rangefinder in general, and the Leica in particular.

And this community seems obsessed by sharpness.

I understand that. The lenses are generally so sharp that, when used to their maximum capability, the effect is almost surreal, three-dimensional, breathtaking. Yes, much of that is the gear, and having bought into the system, it is arguably foolish to fail to take full advantage of it.

But (ahem) focussing so much on sharpness misses the point.

Is sharpness essential to a “good” photograph? And if not, why buy all that fancy gear? If one must shoot the camera from a tripod, using a cable release without breathing to see the astounding sharpness these lenses can produce, why bother?

To tell my truth, modern Leica lenses are so sharp that I can see, without blowing up my images to 100%, precisely where I focussed, and precisely what is out of focus. And sometimes this gets in my way more than it helps me.

Without going all technical about it, it used to be that our tolerance for a slightly defocused image was higher. Film and earlier digital technologies, the older lens formulas, and smaller print sizes all worked together in the photographer’s favor, producing the illusion that everything was sharp when mathematically-speaking, it wasn’t. This phenomenon, called “the circle of confusion”, is no longer reliably as confusing as it used to be, and that is particularly true of Leica equipment. Leica lenses are so sharp and the file sizes so large that I print photographs larger than ever before. To make it all work, I stop down another one or two stops, and in low light, that means I either haul out the tripod or do the best I can, and print smaller or accept some fuzziness.

As I write, my cat grooms his wayward orange fur. Spread out on my kitchen table (where he is not supposed to be), he is luminous in a spot of incandescent light shining down on him. The cool light of the nascent morning is too watery to illuminate the scene, yet it amplifies the honeyed, luscious interior light, full of juicy tonality and peace.

If I hadn’t startled the cat getting up for my camera, I could show you.

Now, if I had the camera on a tripod (and the cat stayed put), Leica could have delivered every golden hair on his gloriously enormous head with extraordinary detail. It would have rendered the light outside the window a delicious blue, the interior light in ochre and umber tints, and the shadows would be soft, strong, and shapely — like the cat. And if I showed you the photograph, and you said, “Wow, I can see every whisker on his fuzzy face!”, I would feel the photograph was a failure.

Why? Because I wanted you to see the light, his centered alertness, and luxuriant naughtiness.

If you said, “Oh yawn, another pointless cat picture,” I’d have been happier, actually.

“Hey that gorgeous beast is the same color as your maple table, and the light in the window, and I wish I could feel that alert at 5:00 in the morning”, and I’d say I made the photograph I’d intended.

When I take a photograph, I want you to to live the scene with me. The way I saw it. Maybe the way I felt it.

If that sharpness is not important to the image, I am not going to risk scaring the cat with the tripod.  I’m going to attempt to take a photograph where my viewer will accept the fuzziness as an artistic choice.

So, going back to my question, sharpness, in and of itself, is rarely essential to my images, but the three-dimensional quality a sharp lens imparts to a scene is important to me. The way a lens handles the transition from sharp to unsharp is crucial, and the way it holds details in the shadows is more important to me than the details in the highlights.

MTF charts and technical reports do little to tell me whether I’m going to love a lens. 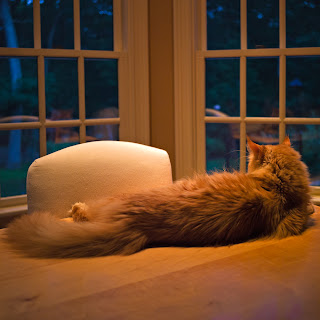 Knowing before I take the shot how the lens is going to respond, and that I can anticipate a certain level of performance, handheld, in low light, exposing for shadow detail — this is something I learned by using my lens in a variety of circumstance, and learned to exploit for my image-making purposes. Leica consistently delivers what I want to see, and that, to me, is the only reason to use Leica gear. Your photographs, and therefore your equipment needs, should differ from mine, but if you respond to these qualities of dimension and light in my work, I can say that I get it with Leica, I got it with Alpa, I got it with Hasselblad, I get it with my old Rolleiflex, and I get it with some of my 4×5 lenses.

But mostly, I get it from within, starting with my desire to share softness and warmth with you.

The cat is back.

This site uses Akismet to reduce spam. Learn how your comment data is processed.